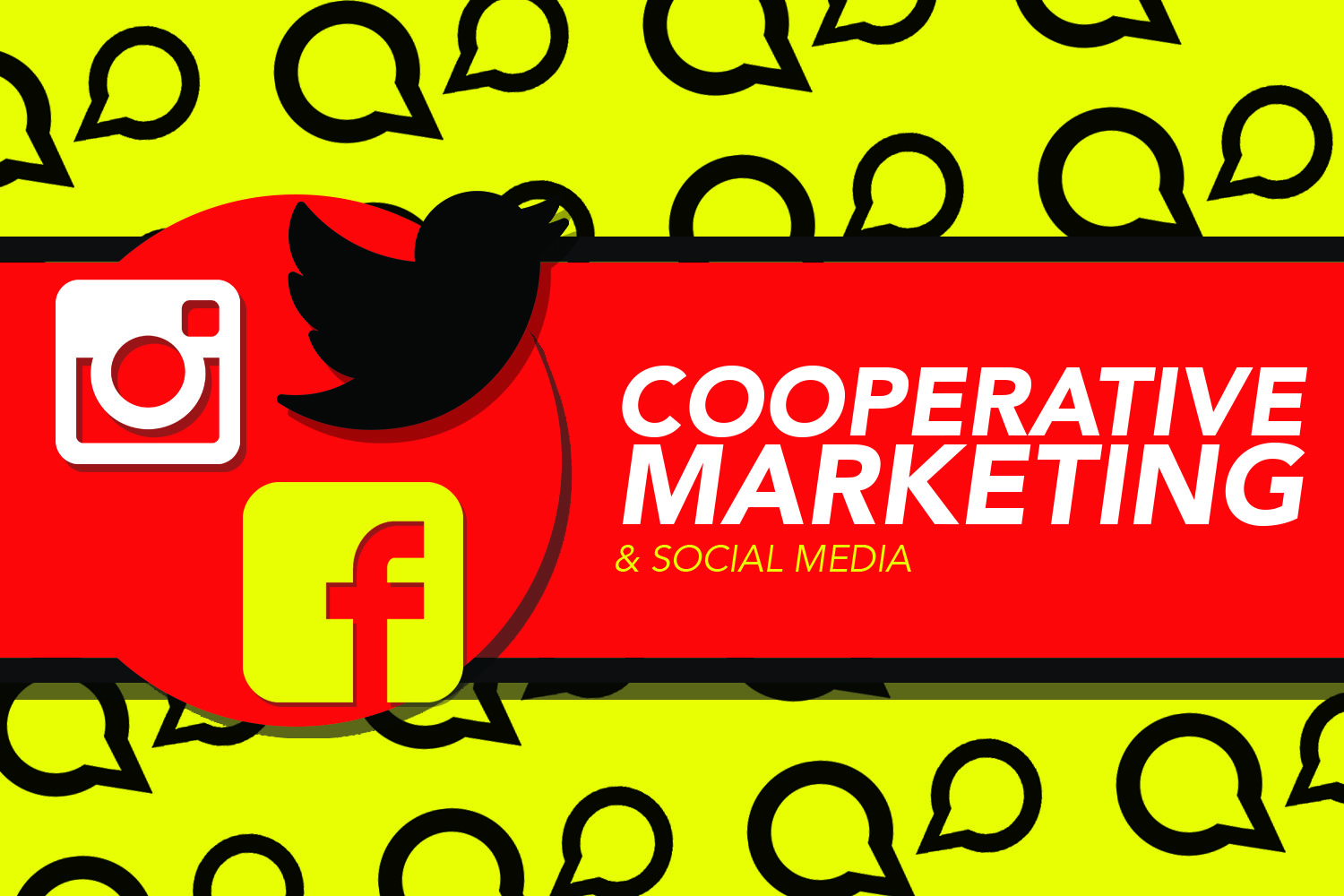 If you’ve been tuned in to social media recently – mostly Instagram and Twitter – then you’ve most certainly noticed some big changes taking place at one of the nation’s most…err…international (?) staple restaurants. That’s right, the International House of Pancakes (IHOP) has pivoted away from their roots and embraced a meatier brand identity as the International House of Burgers (IHOB). And IHOB was anything but discreet about rolling out their seismic shift in branding, teasing and plastering their social media accounts with newly designed graphics and fully owning their new direction. This bold and forthright step into the highly competitive realm of burgers triggered significant amount of collateral chatter from the other major players in this market sector: 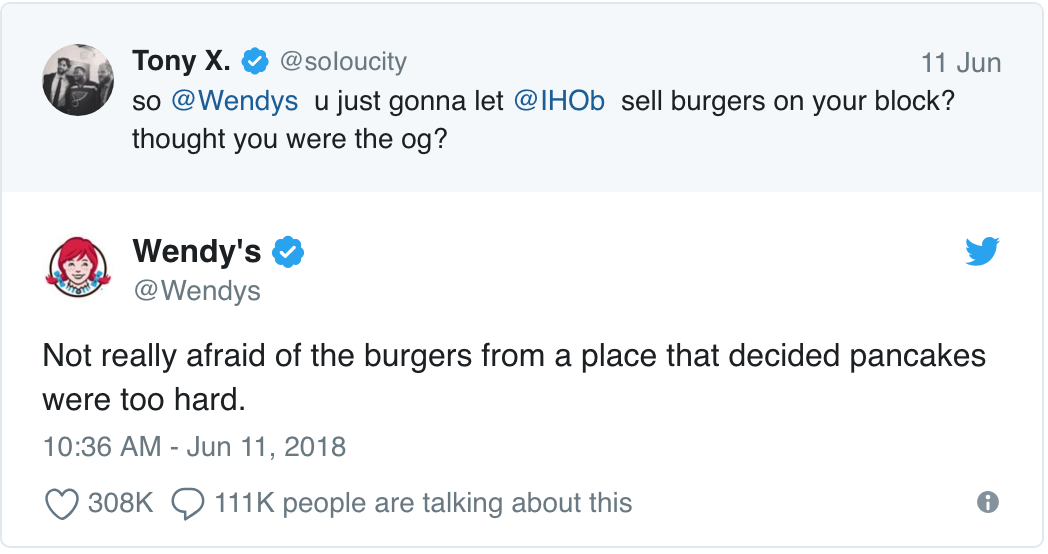 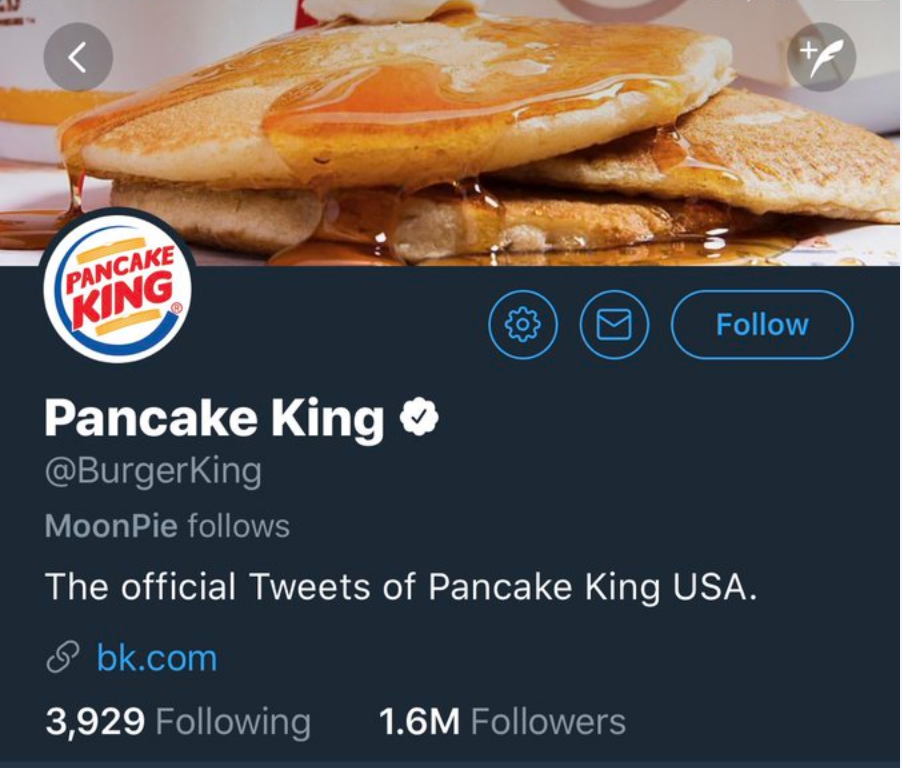 This phenomenon of big-name brands interacting with one another on social media in a same fashion that friends would is something that has been occuring more and more frequently. Another good example comes from the recent announcement by Nintendo, saying that a new update for the hugely popular multiplayer online game, Minecraft, will allow users to interact in the game space across different gaming platforms. Meaning that Xbox users and Nintendo users will no longer be relegated to separate digital universes, enforced by their gaming system of choice, but rather their gameplay experiences will be fully integrated. To that end, the Twitter accounts for Nintendo, Xbox and Minecraft produced this endearing exchange shortly after the announcement was made (note: this appears to have been the first time @NintendoAmerica has ever @’ed @xbox): 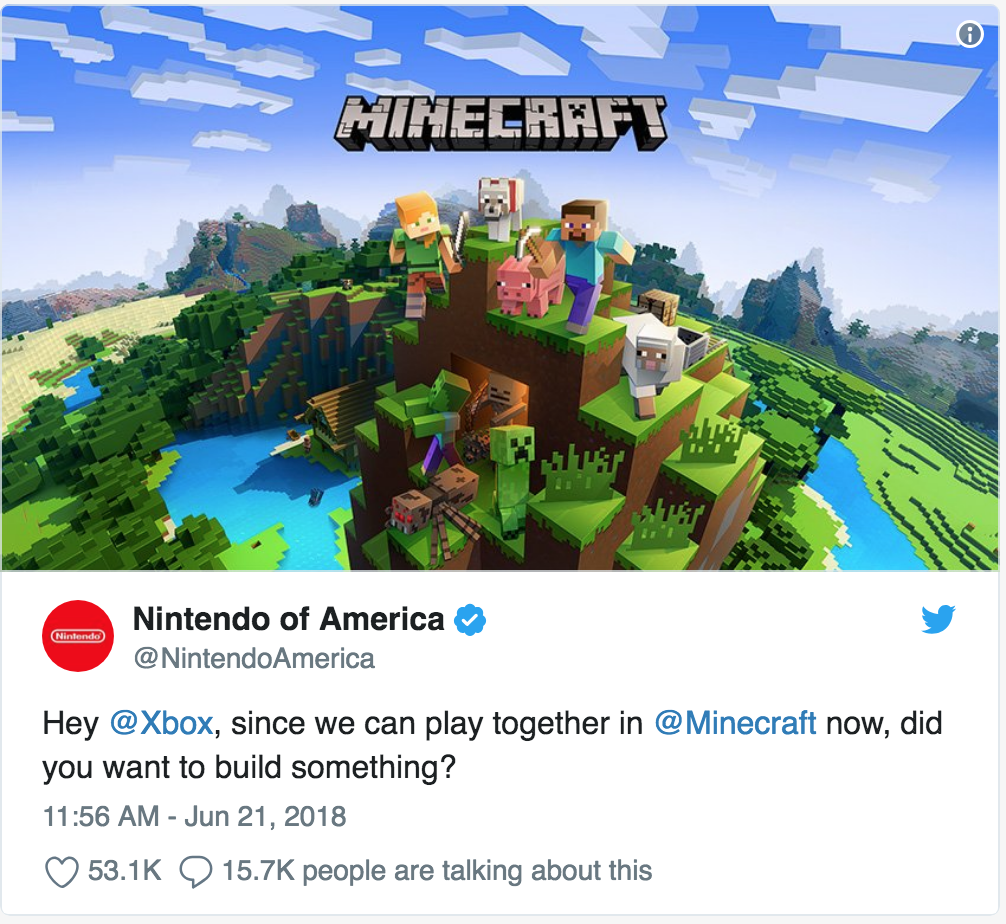 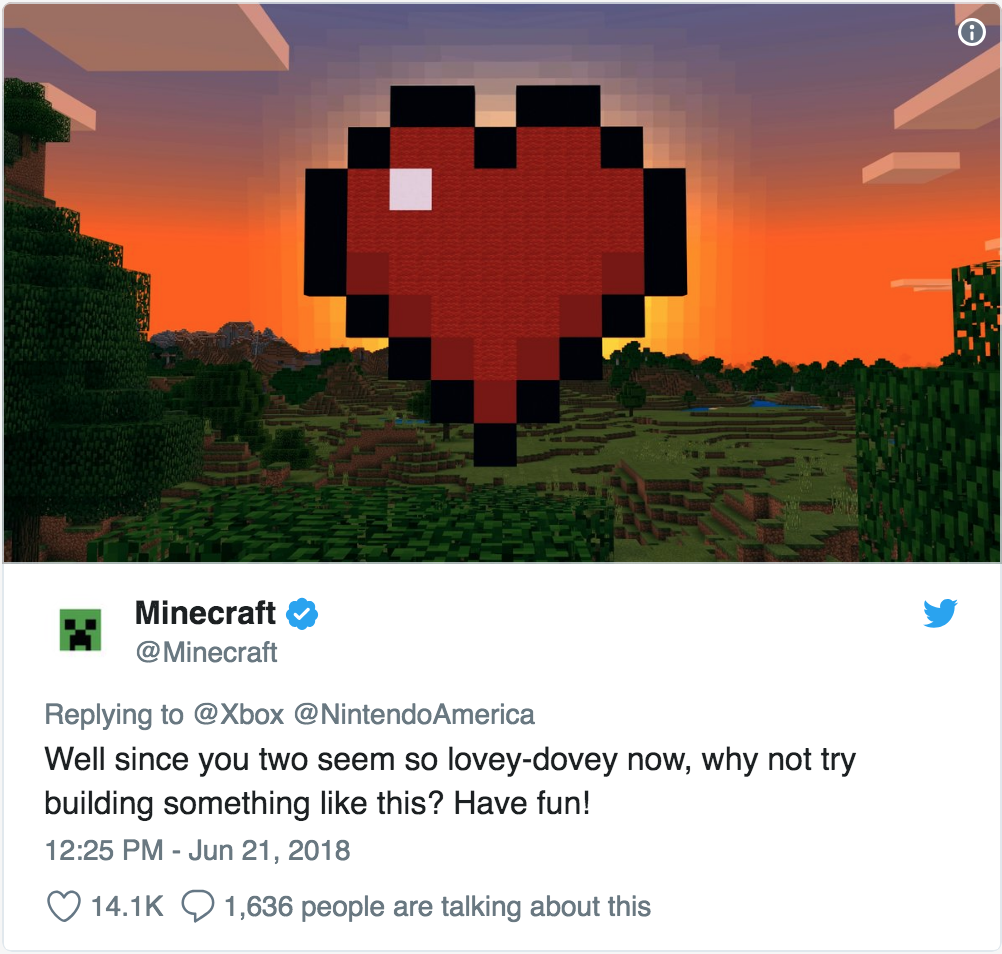 And finally there’s the infamous Wendy’s and Burger King prom interaction from last month, when a local BK physically @’ed the Wendy’s next door using their outdoor sign, asking the red-haired burger icon to prom. Shortly thereafter, BK officially tweeted the image and tagged Wendy’s on Twitter, to which Wendy’s responded with this deftly crafted tweet. 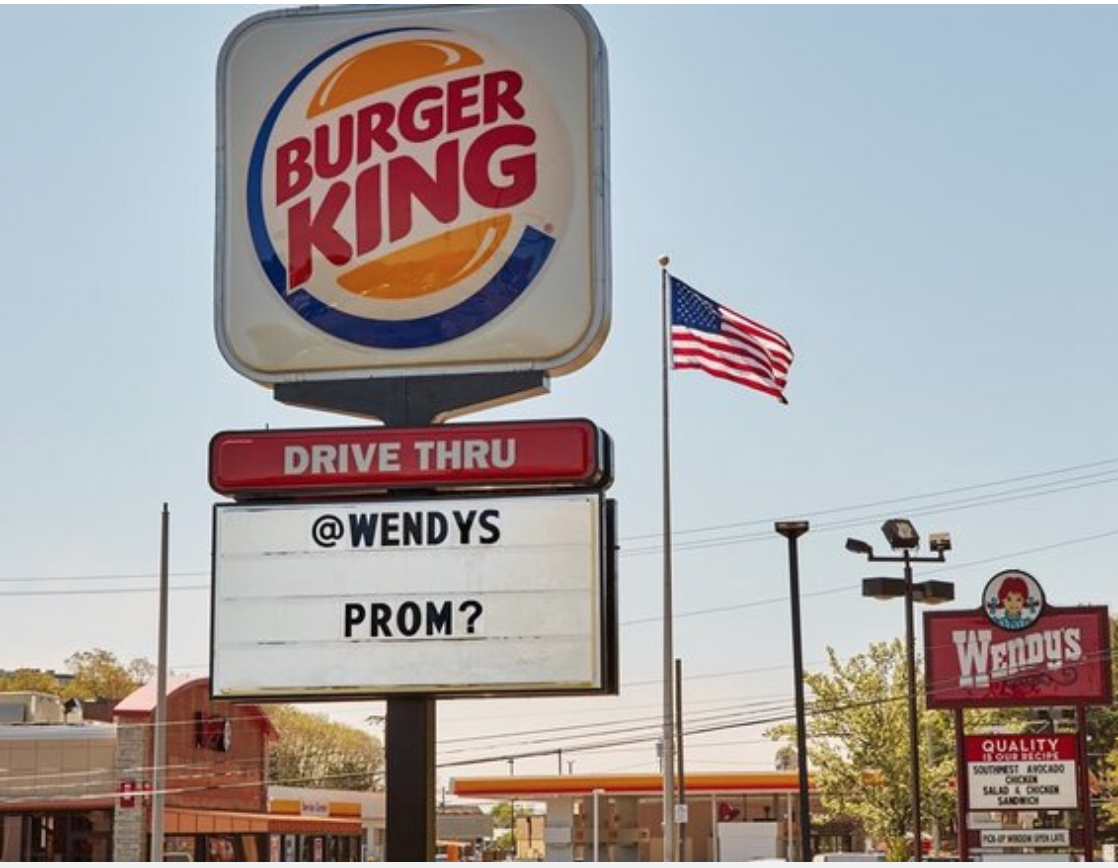 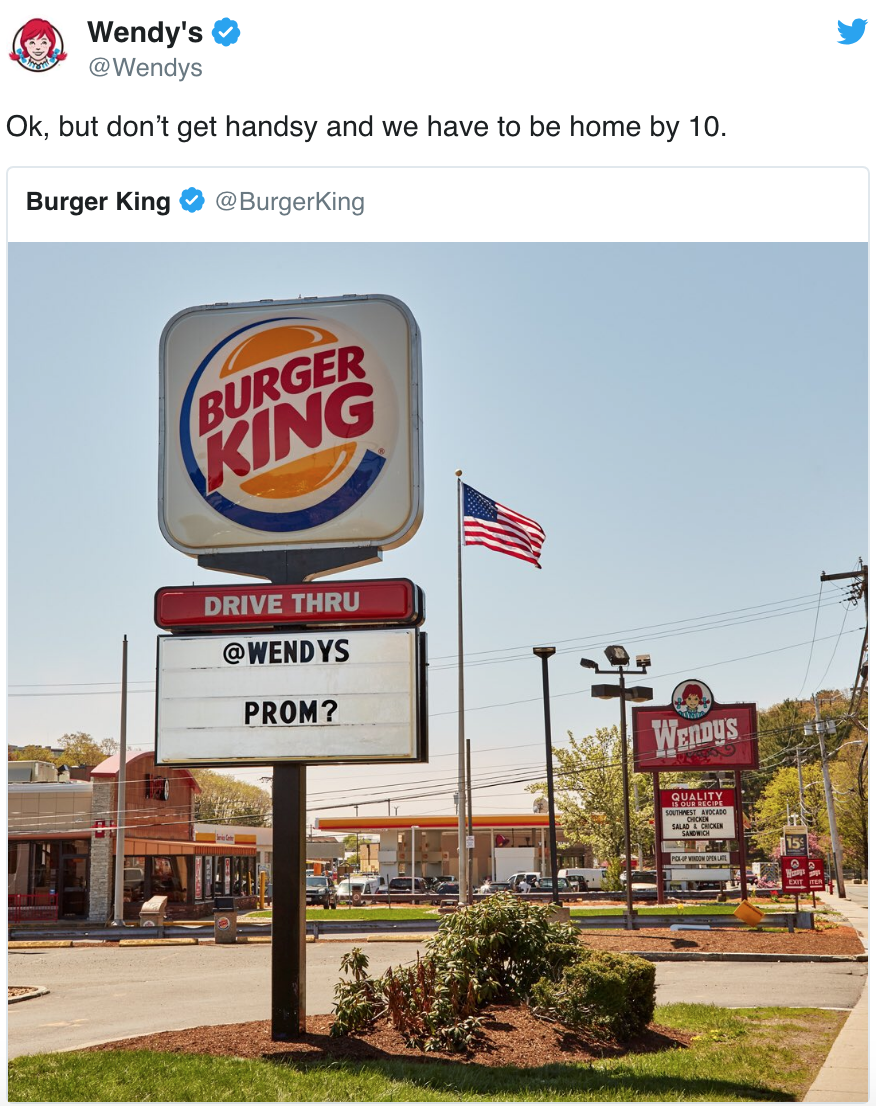 What’s particularly interesting about these instances stems from the fact that these huge brands are willing to put themselves in more or less vulnerable positions with respect to not only their followers, but also their competition. Burger King could have easily been shot down by the historically punchy Wendy’s Twitter account, and Nintendo could have been left on read by Xbox. But, neither of these things happened.

What we do see is rather a degree of brand cooperation in these interactions. The question now that companies must ask themselves is: whether or not this type of cooperative marketing is able to be scaled down? Such that local businesses who share the same market space might be able to adapt these tactics used by the biggest brands to help consolidate their core fans while also expanding their reach to touch a competitor’s fans. The simultaneous comparing and contrasting that takes places brings out not only the differences between the brands – the characteristics that make core fans, core fans (like Nintendo’s casual gaming Switch console versus Microsoft’s more dedicated Xbox or IHOP/IHOB’s wide menu selection versus White Castle’s narrow focus on burgers and fries) – but also the similarities, which represents something relatively novel when it comes to brand marketing.
Keep your eyes peeled for more cooperative marketing tactics on social media as we push farther into 2018 and let us know what you think about this phenomenon in the comments section below!